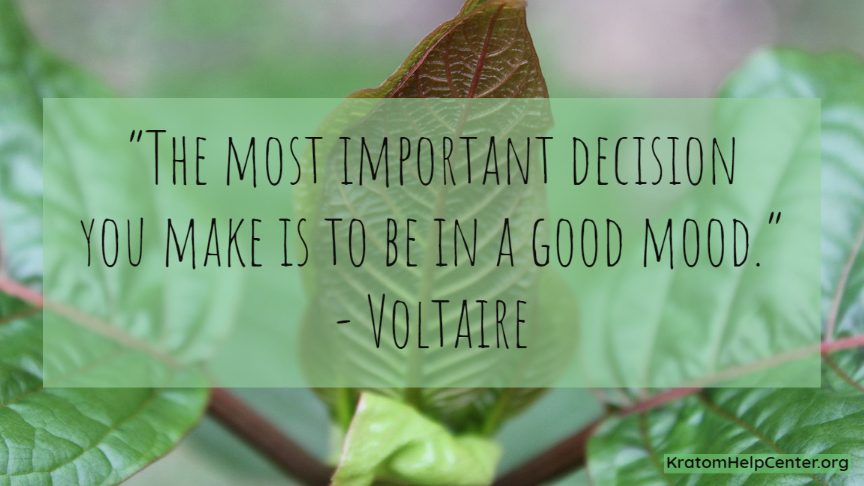 People feel anxious and depressed at times. This is just a normal part of the human condition. The World Health Organization (WHO) estimates that around 300 million people across the globe suffer from some clinical depression. In addition, the Anxiety and Depression Association of America (ADAA) forecasts that 18.1% of Americans suffer from anxiety. Can natural supplements like kratom help them? Here’s what kratom users have reported about it as a natural mood enhancer. As always, read our disclaimer first.

Symptoms of depressive disorders include chronic fatigue, agitation, and changes in appetite. Doctors diagnose patients with anxiety disorders as having ongoing feelings of worry or irrational fears. Both of these conditions can have severe consequences in everyday life and can seem hopeless.

In recent years, many everyday people with anxiety or depressive conditions have turned to alternative medicines. Some of them have tried kratom as a natural mood enhancement supplement. Its users report that it can relieve their stress and enhance their mood—all without the unwanted side effects of prescription drugs. But does it work?

Kratom is a tropical tree that is generally native to countries in South East Asia. In these countries, people have used its leaves as various forms of alternative medicine for over a hundred years. People use kratom, known by the scientific name Mitragyna speciosa, to treat chronic pain and also as a sedative.

Recently the extract from kratom leaves has been reported to be useful in the Western world. Specifically, people who self-treat symptoms related to depression and anxiety have reported positive results. Furthermore, people have indicated improved sleep quality.

The U.S. Food and Drug Administration has only just begun to research the kratom plant for the treatment of mental disorders. As such, clinical trials have not yet produced conclusive results. Until that happens, regulators will not approve it as a treatment for such conditions.

Despite the lack of regulation, there is still a decent amount of anecdotal evidence that suggests this plant could be potentially beneficial for the treatment of these ailments.

If you are considering using Mitragyna speciosa to treat anxiety or depression, be sure to research both the benefits and risks and always exercise caution. As with any supplement, check with a physician before self-treating.

How Do Mood Enhancement Supplements Like Kratom Help With Depression and Anxiety?

Technically, kratom is not an opioid. However, users report that its effects are similar to those of morphine or codeine, depending on the dose. The difference they report is that it does not come with the harmful side-effects of such dangerous drugs.

Kratom contains an ingredient known as mitragynine, which attaches to opioid receptors in the brain. This has a natural pain-relieving effect, but does not come with the chemical side effects of an opioid. Researchers believe it is this mechanism that has the antidepressant and antianxiety effects that many users report.

The leaves of the kratom plant contain the active alkaloids mitragynine and 7-hydroxy mitragynine. When consumed in small doses, these alkaloids can attach to the delta-opioid receptors in the brain, which creates an antidepressant effect.

Alkaloids are also responsible for activating the body’s natural release of dopamine. This neurotransmitter interacts with serotonergic receptors to overcome the symptoms of depression. In this way, people have reported that consuming kratom products can help to elevate one’s mood. In addition, people report that it diminished their feelings of anxiety.

Along with anxiety relief, many users report feeling an elevation in mood and enhanced positive outlook. A 2017 comprehensive review confirms that many users stated a feeling of reduced anxiety and enhanced mood.

Again, more research needs to be conducted in the area. That said, this study theorized that the stress relief properties are due to kratom’s sedative effects. Most users who take the recommended dosage of the extract report substantial benefits, with minimal side effects noted. This is especially true when considering alternative pharmaceutical remedies.

How Is Kratom Consumed?

You can consume kratom in several ways. The most common forms of kratom include capsules, tablets, gum, tinctures, and extracts.

In some areas of the world, people eat the leaves directly from the plant, or boiled them as a tea. In the West, kratom suppliers typically crush or grind the dried leaves of the plant into a powder.

A less common way to consume kratom is by smoking or vaporizing the plant.

Currently, there need to be more studies to determine which method is the best for anxiety and depression. Still, many users report success with only consuming the dried powder or capsule forms. Powder such as the red vein Bali is high in alkaline content and packed with the best antioxidants. This strain is usually recommended for anxiety or depression.

What Is The Recommended Dosage?

If the goal is treating depression and anxiety, it is best to start with a low dose of kratom. Then, slowly increase the amount until the desired effect is achieved. Generally, the plant is fast-acting, but it is still best to take it slow. This is because it can have different results depending on age, sex, and weight.

Additionally, different strains and methods of consumption affect users in different ways. For instance, the extract is more concentrated and is considered more potent than the powdered form. If the goal is stress or anxiety relief, then users recommend to start with the less concentrated powder form.

Oliver Grundmann conducted an online survey of 8,049 regular kratom users in the US. In it, users reported preferred dosage levels for optimal results. The consensus was that a dose of up to 5 grams taken at least three times a day was sufficient. At this dosage level, users reported experiencing the desired mood-enhancing effects. Over time, proper dosing will train the body on how to battle anxiety.

It is also possible to build up a tolerance with this supplement. The consensus is clear on how best to experience the benefits that kratom has to offer. To do so, take your ideal dose for one or two days and then take a 2-3 day recovery period. Users say that you should also pair your kratom regimen with other stress-relieving activities. These include yoga, meditation, counselling, and even breathwork for maximum results.

Using mood enhancement supplements like kratom to self-treat anxiety or depression disorders will not be an instant fix. But, its advocates say that it will certainly help relieve some of the stress involved. Many users were able to attack the root cause of their mood issues. They reported doing this by using this natural mood enhancement supplement. Furthermore, they did this in conjunction with healthy lifestyle changes to improve their condition. Remember to check with your doctor before starting any herbal supplement and always use your best judgment.